There are various events in every season in Japan. We would like to introduce some of them. 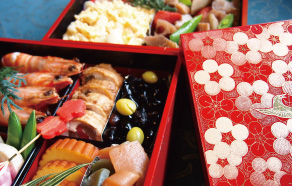 Shogatsu is an event that celebrate and welcome the Toshigamisama, god responsible for Hojo, and is an alternate name for January. Today, the period between January 1 through January 3 (Sanganichi), and the period until January 7 (Matsunouchi, or Matsunanuka) are recognized as “Shogatsu” (New Years). Some rural areas refer to the period until January 20 (Hatsukashogatsu, or Honeshogatsu) as Shogatsu. It is a time to think of a new year’s resolution and renew feelings to accomplish it. It is also a time to send Nengajo (New Year’s greeting cards) to close friends, and families. Families gather to celebrate over food and drinks. It is specifically this time of year when Japanese people eat Osechi-ryori (Osechi dishes). Children are excited to get New Year’s money from relatives. Oshogatsu is the most important event for Japanese people. 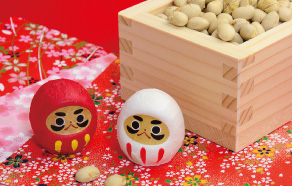 Setsubun is the day before the beginning of each season (spring, summer, autumn, winter). The word also means "to separate the seasons". After the Edo period (1603 to 1868), "Setsubun" refers to the day before the beginning of spring (around February 4 each year).
It is thought that evil (ogre) appears in the beginning of the season, and in order to drive it away, beans are thrown with the chant of "Oni wa soto, fuku wa uchi (Evil out, good fortune in)". People eat cooked beans, the number of your age. Depending on the region, some people eat the number of beans equivalent to their age plus one, which is thought to make one stronger and avoid catching colds. 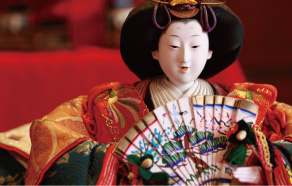 Hina Matsuri is celebrated on March 3rd of every year by decorating Hina dolls and eating Chirashizushi, and Osuimono (clam soup), and is an event to pray for the healthy growth of girls. Hina Matsuri was originally an ancient Chinese festival (Jominosekku) which took place near river. During the Heian period (794-1185), people enjoyed Hiina Asobi (popular paper dolls amongst aristocratic girls in Kyoto) and the custom of Nagashihina (floating these paper dolls in the river). During the Edo period, the quality of dolls developed and the custom changed from floating the dolls in the river to decorating them, and eventually was recognized as a girls’ festival. There are festivals around the country with specific characteristics per region and it is one of the biggest events in Japan during the spring. 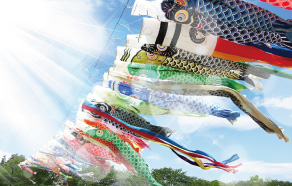 Tango is one of many seasonal festivals and is currently celebrated on May 5th. Though it became “Children’s Day” in 1948 (celebration of a child’s individual personality, pray for the child’s happiness, and showing respect to his mother), the custom (still in place today) of decorating armored helmets, Koinobori carp flags, and eating Chimaki and Kashiwa Mochi to celebrate the birth and growth of boys has been in place since the Nara period (710- 794). Koinobori are flag-like decorations shaped as carp fish and is based on an ancient Chinese story, and symbolizes the celebration of a boy’s success. The decoration of armored helmets is based on old customs of generals and military commanders. It is a custom which is said to ward the child from danger so he can avoid getting injured. 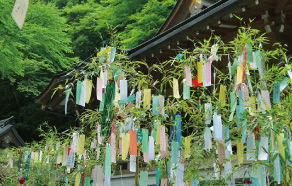 Tanabata Star Festival (alternately, Shiseki) is one of the seasonal festivals that occurs in Japan, Taiwan, China, and Vietnam, etc. On the evening of July 7th every year, wishes are written on colorful strips of paper and decorated on bamboo leaves as people pray to the stars for their wishes come true. Tanabata comes from the combination of the Japanese Tanabata spiritual story and the Chinese Kikoden story. It is believed that Orihime and Hikoboshi who are separated by the Amanogawa (Milky Way) are able to meet once a year on that day. The decoration on bamboo leaves began during the Edo period. Depending on the area in Japan, Tanabata is celebrated on July 7th, or August 8th, and Tanabata Festival in Sendai in August is very famous.

There are various cultures in Japan. Since we are unable to introduce all of them, we would like to introduce several major events. 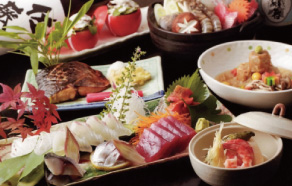 Japanese cuisine is called "Washoku" (academically "Nihon Ryori") and it is quite different from European and Western Asian cuisine, but East Asia and Southeast Asian countries have many similar ingredients and cooking as Japan. The unique characteristic of food in Japan is manners. Many East Asian countries serve dishes family-style, large dishes and pot dishes. Traditionally in Japan, meal is served individually using individual tableware. In addition, in Japanese cuisine, it is permissible to pick up dishes and bowls with your hand, and it is traditional to eat only using chopsticks.
There are many other customs only observed in Japan, such as slurping soba or udon noodles. Recently, there has been growing attention on the low-fat Japanese diet and it is regarded as a healthy diet. 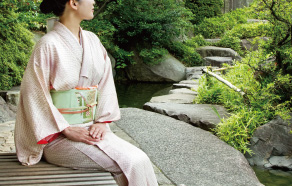 Western style clothes have been mainstream since the Meiji period (1868 -), but the traditional Japanese clothing culture is "Kimono". Especially concerning women, there are many elements that bring out internal beauty in addition to the gorgeous colors that accent the exterior. Kimono is often worn at celebrations but recently, more and more younger women are enjoying Kimono as everyday wear and its charm is being rediscovered.
There are various kinds of Kimono for each occasion and the kind of Kimono to be worn must be appropriate for the situation. Examples include formal wear, semi-formal wear, town wear, and casual Yukata. Also, by changing the Kimono material, it can be worn throughout the year no matter the weather. Traditionally, the pattern of the Kimono reflects the season one month ahead. For example, when wearing a Kimono in February, it would be appropriate to have a design reflecting March flowers such as red cherry blossoms or peach blossoms.
It may be good to first try a Yukata, a summer style which is the easiest of the Kimono styles.